Confronting the Unspeakable. Hiroshima, Nagasaki and Beyond


August is the time for calling to mind the atomic slayings of Hiroshima and Nagasaki. Seventy-three years ago, the Pentagon exacted a savage retribution for the Japanese attack on Pearl Harbour in December 1941. It also exercised its prerogative to "test" the effects of newly developed nuclear bombs on two cities and their unfortunate inhabitants.

The quaintly named Little Boy was an unearthly obscenity that tore history apart and changed life on the earth ever after. It was based on a very simple design. A relatively small pellet of highly enriched uranium (HEU) was shot into a larger block of highly enriched uranium. This produced a sufficient mass of heavy radioactive metal to start an unstoppable chain reaction that tore atoms apart and released an unspeakable fury of destructive energy. The entire city of Hiroshima was instantaneously transformed into a cindered atomic wasteland.

Some 70,000 lives were vaporised in an instant when the bomb detonated 600 metres above the city. It has been estimated that over the next five years, a further 130,000 people died as a result of injuries sustained in the initial blast and the longer term effects of radioactive fallout.

But the destruction of Hiroshima together with its inhabitants was not enough.

The torching of Nagasaki followed three days later. The bomb dropped on Nagasaki was a larger "device" than that gifted to Hiroshima and was of more complex design. It was cynically named Fat Man by its creators. It consisted of a central core of plutonium into which multiple explosive charges impelled smaller lugs of plutonium to bring it to critical mass. It “yielded” an explosive force equivalent to 22,000 tons of trinitrotoluene - TNT. Thus the wonders of human ingenuity, amoral engineering and value-free techno-chemistry.

The sheer criminality of the gratuitous atomic slaying of Nagasaki has been widely understood. The wise and compassionate Kurt Vonnegut Jr. offered his own thoughts at a public lecture commemorating the 50th anniversary of the bombing of Hiroshima on August 6th 1995:


"I have said, largely out of respect for my friend William Styron, an ex-Marine officer, who avers that he would be dead if it weren't for the bombing of Hiroshima, that the atrocity did indeed save the lives of many Americans and Japanese.

But a single word which I am about to utter proves to me that our democratically elected government has been and may still be capable of obscene, racist, high-tech, yahooistic even gleeful massacres of defenceless civilian populations. For the few of you who have not guessed that word, a foreign word, I will speak it now: Nagasaki."


Hiroshima and Nagasaki were part of an infernal calculus coldly rationalised to test the effects of these finely wrought mechanical wombs of an inhuman energy. Hundreds of thousands of lives were extinguished in those two insane lashings. The lucky ones died immediately. The less fortunate ones dragged their flayed flesh and seared futures through agonising days and weeks. Tens of thousands walked silently as living ghosts through the ruins of what has been forgotten by so many in these amnestic times.

And where are we today? On a positive note, many of the 64,000 nuclear warheads that bristled into the 1980s have been dismantled. During this eighteenth year of the new millennium, we can all rest easier in the thought that a mere 14,500 nuclear infernos sit snugly in rocket cones stored in deep silos, on floating platforms, in the hardened steel chambers of sleek and silent submarines that cruise the world’s oceans, and in warehouses throughout the United States, the Russian Federation and the small but privileged "elite" group of nuclear-armed states.

Leaving aside the nightmarish consequences of a large scale nuclear war between the great powers, if a limited regional conflict between India and Pakistan in which each side "delivered" 50 relatively small Hiroshima-sized bombs against the other were to erupt, the lives of tens and possibly hundreds of millions of people would be destroyed, and the future of the inhabitants of both nations would be shredded. But it would not end there. In addition to producing radioactive fallout on a global scale, it has been widely recognised that such an event would both alter longer-term global temperature patterns and destroy much of the earth's protective ozone layer, thereby creating a state of global nuclear famine. In addition, the combination of widespread radioactive fallout and the destruction of the ozone layer would expose the cells of all living creatures to unpredictable genetic damage, thereby darkening even further an already darkened future. We have yet to fully comprehend the consequences for both humanity and for land-based and marine ecosystems of the meltdowns at Chernobyl and Fukushima.

It has recently been confirmed that the United States has slated more than US $1,200 billion for the maintenance and modernisation of its nuclear arsenal over the next 30 years. This is an inconceivable amount of money. In attempting to understand this in more concrete terms, consider the following:

In other words, over the next 30 years, and apart from any other military expenditure, the United States intends to spend the equivalent of a length of well-compressed $100 bills extending from the Melbourne CBD to Lismore in northern New South Wales on upgrading its nuclear weapon systems. And this at a time when one person in ten on the earth has difficulty finding enough food to get from one day to the next, and so many in the so-called developed countries have difficulty getting by from one week to the next.

Meanwhile, base-line infrastructure throughout the United States begins to break down on multiple fronts  and the cooling ponds carrying much of the 70,000 tons of highly radioactive spent nuclear fuel from US nuclear reactors are full to overflowing with nowhere to go. Hmmm . . .

Russia and the other nuclear states meanwhile pursue their own far less extravagant, though no less obscene modernisation programs.

The lessons of the past have not been learned. The present Commander-in-Chief of the US military machine continues to use demonically-charged rhetoric in his provocations with nations that are deemed not to have toed the line sufficiently. In August 2017, Donald Trump threatened North Korea with "fire and fury like the world has never seen." A year later in July 2018, he issued the following warning to Hassan Rouhani, President of Iran: "Never, ever threaten the United States again or you will suffer consequences the likes of which few throughout history have ever suffered before. We are no longer a country that will stand for your demented words of violence and death. Be cautious!"

In the insane display of power and its exercise, there is never a shortage of demented words.

Setsuko Thurlow is one of the few remaining living witnesses of the horror unleashed over the city of Hiroshima on the morning of August 6th, 1945. In March 2017, she offered an extraordinary reminiscence of that day and its consequences for her life - and for our collective futures - at the Centre for International Studies and Diplomacy at the University of London.

Setsuko Thurlow has spent most of her adult life as an advocate and campaigner for the total abolition of nuclear weapons. She was one of the speakers at the inaugural meeting of the International Campaign to Abolish Nuclear Weapons (ICAN) in Canada in October 2007, and together with Beatrice Finn, ICAN's Executive Director, accepted the Nobel Peace Prize in Oslo in December 2017 on ICAN's behalf.

The embedded audio below offers an edited version of the presentation she gave in London in March 2017. In her talk, Setsuko Thurlow offers an unforgettable account of what happened at ground level in Hiroshima on the morning of August 6th, 1945.

Confronting the Unspeakable can be streamed using the media player above. A CD quality mp3 file can be downloaded from: https://archive.org/details/HiroshimaMemorialAugust2018 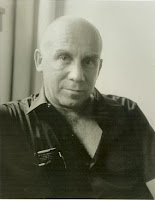 Original Child Bomb is one of a small number of pieces written by Thomas Merton which he describes as "anti-poems." It concerns the atomic slaying of Hiroshima. Merton's anti-poems are characterised by the conscious and ironic use of the debased, but now common-place language that masks the horror of genocide.

This post offers audio of a performance interpretation of the poem together with its full text. 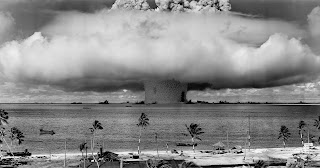 2. On the Ruin of Rongelap. When Protectors Become Destroyers

At the end of World War II, the Marshall Islands was handed over to the United States as a "Protectorate" by the United Nations. In June 1946, the US Navy "tested" a 23 kiloton bomb above Bikini Atoll. Over the next 12 years, the US detonated a further 66 nuclear and thermonuclear bombs in the Islands.

On the Ruin of Rongelap offers both an audio presentation and a substantive essay detailing the events surrounding those tests and their consequences on the inhabitants and their children.
Posted by Vincent Di Stefano at 01:15 1 comment:

On the Ruin of Rongelap. When Protectors Become Destroyers